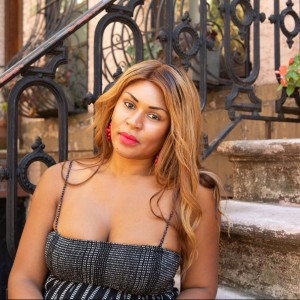 It’s fashion week season and that means there’s a round of designers showing their lines for the upcoming season. Within the fashion shows, we saw similarities in trends as well as clear differences in design directions. Here, we’re taking a look at some of the runway shows and designers collections for Spring/Summer 2022 Ready to Wear.

At New York fashion week in September, Tom Ford held his Ready To Wear Show at Lincoln Center. There was a tone of glitz in the air and the show was filled with plenty of sparkle, literally.  The theme of the collection is functional athleisure with a glam vibe. There was plenty of vibrant and bright, bold colors and nearly every piece was adorned in full sequins. The silhouettes were less structured and had a more relaxed feel. An interesting mix of fabrics and textures presented in a variety of materials including velvet, metallics and leather is unexpected since we don’t often see in them warmer season. Some of the highlights of Ford’s interpretation of functional fashion were culottes, cargo pants, joggers and even animal print made an appearance. We can’t help but love the fun and and dazzle surrounding the pieces in this collection.

The designer and daughter of legendary Beetle, Sir Paul McCartney had her collection’s showing in Paris. The creations had a sporty aesthetic with a mix of relaxed and tailored silhouettes. Trendy cut outs and asymmetric lines were featured on many of the pieces. There were also some Boho styles and prints which had a psychedelic flair to them. The color palette consisted of bursts of color including blues and melon tones ripe for Spring/Summer. Solids were primarily present with some prints strewn in to balance out the collection. McCartney’s inspo for the collection was influenced from a documentary of mushrooms, which has properties that can be used in fashion, as she did. With sustainability in mind, recycled, regenerated and vegan materials were built into the construction of the garments.

French Fashion Designer Isabel Marant also held her show in her native country. The vibe was fresh with Boho, beachy styles in pastels of pinks, purples, blues and ombre colors as well as plenty of prints with an airy feel. White also had its moment in the spotlight on several designs. Lightweight and sheer fabrics along with delicate, feminine details were highlighted on her apparel. Another notable item in her collection was the use of cargo pants and jumpsuits that draped on the body with fluidity. The line was inspired by 90’s beach photography that had a profound influence on the designer’s garb.  This collection already has us looking forward to beach season!

If there is one word to describe the essence of Versace’s show, its FUN! Creative Director and powerhouse Donnatella Versace brought playfulness and attitude that rocked her runway. Walking on the catwalk were celebrities like singer Dua Lipa, making her runway debut and the face of Versace’s new visual campaign, Madonna’s daughter and Supermodel Naomi Campbell. The collection had a lot going on with bright neon colors, retro styles, metallics, bold prints and logos, which is a current trend. The iconic label’s safety pin symbol was even featured on some of the designs. There is no doubt that this show was a major hit!

The Portugese design house is celebrating their 10th Anniversary this year. Taking pride in their commitment to environmental change and ethical practices in the industry, models in their show wearing the sartorial pieces were an all inclusive cast. Handmade elements were also incorporated into the clothing. Saturated colors and tie-dye creations were presented as part of the vision of the collection.

Alberta Ferretti’s show had a tone of newness to her collection. The elegance and simplicity in the concept and design spoke volumes on their own. Jewel and earth tones were selected as the shades for her attire. Soft, flowy chiffon fabrics and cut outs are a recurring theme in multiple collections including this one. A significant print featured in the collection was that of butterflies which are known to represent renewal and beginnings which influenced the designer coming out of lockdown.

The most recent label to share their runway looks opted to forego with tradition and hold their show after fashion week. In late October, their show took place in an unlikely location, Detroit, Michigan, the motor city. For the first time, the Italian luxury fashion house held their show in America. Inspiration for the line from Creative Director, Daniel Lee came from feeling a connection to the city. The designs had a modern industrial and utility focused theme. Multiple shades of green, a signature color for them, were noted in a variety of dress silhouettes from this unique collection.

In September, during fashion week in Paris, Acne Studios led by creative Direction Johnny Johnson shared their collection. According to him, the collection is fueled by experimentation which is at the heart of their label. A mostly earthy palette of designs infused with chiffon, crochet fabrics were represented in this collection. Corsets and other textiles like leather and plaid were also used in a way to create juxtaposition of soft and edgier pieces working together in their pieces.

Pier Paolo Piccioli debuted his collection for Valentino in Paris. While we normally see elegance and couture designs from Valentino, this collection had a more casual and relaxed feel with pieces like denim and shorts introduced in the line. White of course was present, as Valentino always does well but the statement color causing a huge impact was purple. The saturated shade took the spotlight with classic style gowns and a three-piece ensemble summer shorts suit.

Louise Trotter, head designer for Lacoste, the label known for the infamous crocodile logo and elevated sportswear brought their classic pretty style with a mix of street wear to their collection.  Light colors and deeper tones were chosen for their sporty separates with a French flair.  The pieces are created to blend athletic uniforms and daily dressing. Innovative performance fabrics like neoprene, rubber and mesh are built into the garments for functionality. As it is a sportswear brand, some accessories featured in the collection were knee socks, visors and sunglasses.

Protected: Here is A Roundup of the Best Pieces to Elevate Your Coastal Grandma Style

There is no excerpt because this is a protected post.

The jelly shoes that took over fashion footwear in the 80’s and 90’s are back. For Summer 2022, there’s plenty of new variations in the clear plastic shoes we were obsessed with way back when that come in transparent and colors. You’ll also find them combined with other hot trends like platforms and embellished with gems.

“Rainbow Inspired Fashion is Trending This Month in Celebration of Pride” If you have checked your social media feeds lately,

Zara’s Spring 2022 Collection is Full of Retro Prints and We Love It, Here are the Best Prints To Shop At Zara

For Summer 2022 Retro Prints are In !!! trendy-traveller   The retro fashion trend is in full swing and nothing

This summer’s shoe trends are anything but boring. With Y2k and Retro Fashion in full effect there is something for everyone to choose from. From Gladiators to Disco Wedges, Clear Shoes, Clogs and Mary Janes. All of your favorite retro styles from the early 2000’s are back !!